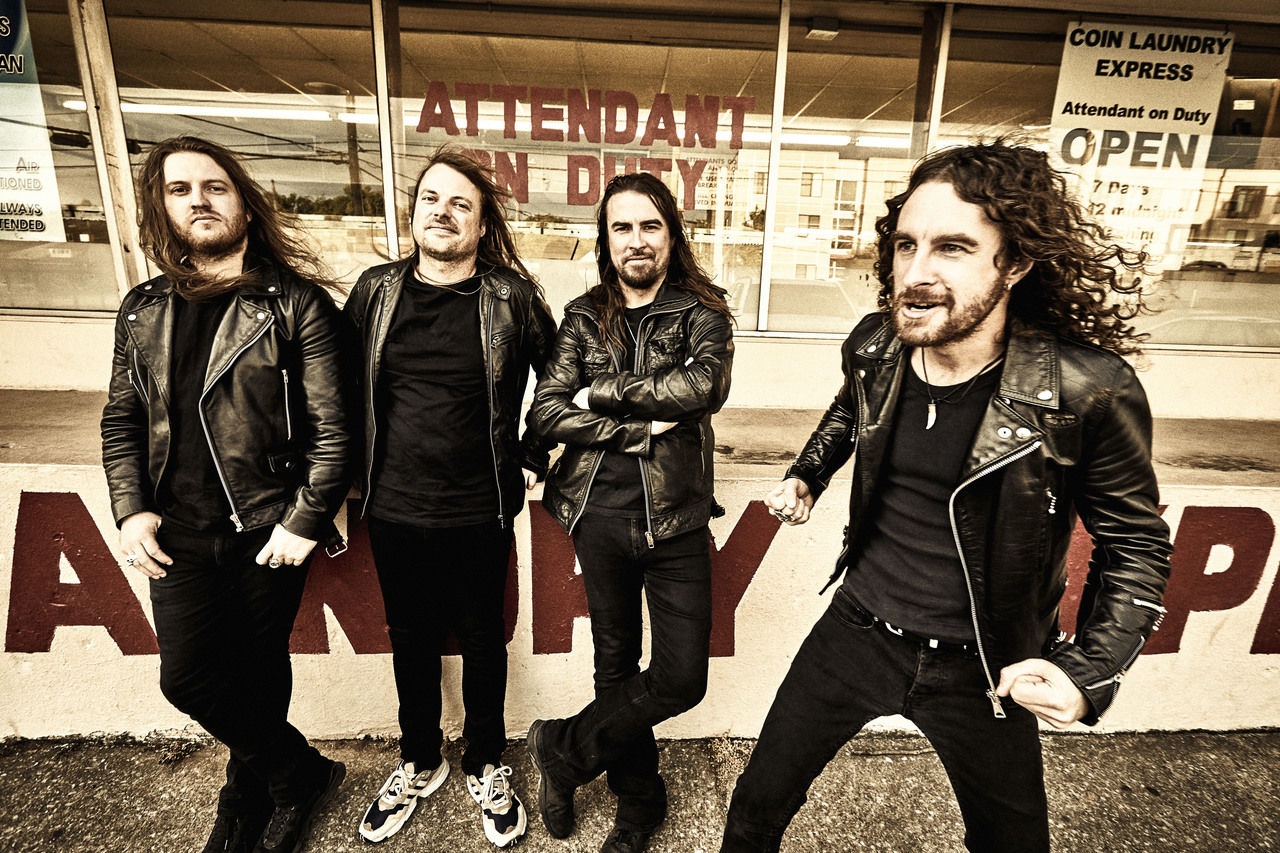 Some buildings have a soul. They breathe and sweat and pulsate, holding memories and stories and songs and laughter in their walls. RCA Studio A in Nashville, Tennessee, is such a place…

The photos on the walls of the ‘Music City’ recording facility testify to its illustrious history, with Elvis Presley and Roy Orbison and Willie Nelson and Waylon Jennings, architects of rock‘n’roll and country music, smiling down upon visitors. Elvis and The Beach Boys recorded here, as did B.B. King and The Monkees, and Joe Cocker and Tony Bennett. In 1973, Dolly Parton recorded ‘Jolene’ and ‘I Will Always Love You’ in the 5,000-square-foot studio in a single day.

For Airbourne to bowl up to 30 Music Square West in April of this year with no songs cast in stone, just a pocketful of riffs and a burning desire to make the truest rock‘n’roll record of their 16 year career, took a certain chutzpah, then, and a lot of balls. But history shows Airbourne never have backed down from a challenge…

In the early days, in their native Australia, Joel & Ryan O’Keeffe’s band would load their guitars and amps and drums into a station wagon and drive for 24 hours to play in the sort of bars where the patrons had prison tattoos, more fingers than teeth, and a dangerous lack of interest in having their drinking time spoilt by strangers. The boys would inevitably be met at the venue doors by a man whose only records were criminal ones…

“We’d be told, ‘If you guys are gonna make a heap of noise I better fucking like it!’” Joel once recalled. “These were the kind of people who wanted a good Saturday night, and if they didn’t get it, there was gonna be trouble.”

It was a tough apprenticeship, but it instilled a fearlessness and a focus in the O’Keeffe brothers. Their dream of escaping their hometown of Warrnambool, Victoria, was underpinned by one simple motto: Rock‘n’Roll For Life.

It was their unshakeable allegiance to this basic credo that brought Joel & Ryan O’Keeffe, Matthew Harrison and Justin Street to Nashville in early spring 2019. Waiting for them in RCA Studio A was six-time Grammy Award-winning producer Dave Cobb. Best known for his work with country superstars Chris Stapleton, Brandi Carlile and Sturgill Simpson, Cobb had, for some time, been itching to record a full-tilt, earth-shaking, balls-to-the-wall hard rock band, the kind of band which had set his pulse racing as a teenager growing up in Savannah, Georgia. Within minutes of Airbourne setting up in his studio, the 45-year-old producer knew he’d found his men.

“Cobb is a rock ‘n’ roller at heart,” says Joel. “When he was growing up, he was learning the same AC/DC and Led Zeppelin riffs that I was learning growing up, on the other side of the world. He was adamant that he wanted to make a pure rock‘n’roll record, which is exactly what we were there to do. We really wanted to work with a producer who could bring out something different in the band. He was our dream choice.”

Cobb’s vision for the album was breathtakingly simple: to tap into the spirit, energy and excitement of vintage rock‘n’roll recordings; to get Airbourne to write and record an album right off the studio floor. In the Australian quartet’s catalogue – from their 2008 debut ‘Runnin’ Wild’, via 2010’s ‘No Guts. No Glory.’ and 2013’s ‘Black Dog Barking’, through to 2016’s ‘Breakin’ Outta Hell’ – he heard a band in the grand tradition of AC/DC, Thin Lizzy, Motörhead and The Who, a death-or-glory rock‘n’roll outfit with fire in their collective belly.

The mission for the weeks ahead, therefore, was to fully capture this raw, feral, live energy on tape: to make a completely unfiltered, unprocessed, uncompromised, pure fucking rock‘n’roll record. The band had barely unpacked and plugged in before their new producer informed them that he had the tapes rolling…

“Normally, In the past, it’d take us three weeks to get a guitar tone,” laughs Joel, “but with Dave, we got into the room and it was, ‘OK, let’s go!’ He wanted to make a record the way that records were always done in the old days in that studio. There’s a reason he has all those platinum discs on his walls, and that reason is that there’s no-one better at capturing raw performances. It’s not rocket science, but it’s a craft that’s been lost in so many modern recordings. He wanted old school, one take recordings, no messing. He told us that’s where the true magic is.”

Cobb’s methodology took some adjusting to. Ryan laughs as he recalls how, at the end of one take early in the sessions, he confessed to speeding up in a track’s pre-chorus only to have the producer respond with one word: “Good!”

“I said, ‘What do you mean, good?’ And he said, ‘No, that’s great, that’s how it is, it’s real, that’s the take’. He’d bring us into the control room and play back the track and it would sound amazing. We’d be like, ‘How did you get that?’ And he’d say, ‘You played it, not me’. We had to learn to trust ourselves as much as he trusted us. It was cool, like having a fifth member of the band.”

As the sessions progressed, Airbourne began to get more comfortable with their new working methods. Songs were constructed from the ground up, the musicians playing on instinct and intuition, all in one room, locked into a single groove. Joel would use a hand-held mic to record his vocals, screaming over the PA, his voice bleeding into the sounds shaking Studio A’s walls. They knew they were getting somewhere when, during one particularly intense take, Cobb cut the sound and screamed, “You guys were built to rock!”

The result of this creative collaboration is ‘Boneshaker’, the most immediate, visceral, spontaneous and thrilling album of Airbourne’s career. 10 songs in 30 minutes, raw, alive and bristling with attitude and intent.

From the thunderous opening riff of the title track through to the raucous, roaring, bad bad boogie of ‘Rock‘n’Roll For Life’, it’s a celebration of life lived loud – no shame, no surrender, no regrets, no wasted moments. There’s lust and aggression and rage and defiance, tales of messy nights and broken hearts, excess and abandon, brotherhood and love and community. If you listen closely, you might even detect a little country ‘n’ western twang in ‘Burnout The Nitro’.

Joel has never been one to explain his lyrics (“We want people to hear the songs and make up their own mind and create their own memories as to what they’re about rather than us guiding their listening”), but titles such as ‘Sex To Go’, ‘She Gives Me Hell’ and ‘Backseat Boogie’ shouldn’t require too much decoding.

‘This Is Our City’, a love song of sorts to the band’s old stomping ground, Melbourne, finds the vocalist singing “Shout it out, scream it loud. Turn it up, rock the house!” Back when they shared a house in the city, the O’Keeffe brothers would watch classic AC/DC and Iron Maiden and Metallica videos and wonder where things had gone so badly wrong in modern rock. Their solution was to play the kind of music they wished they could hear, rock music delivered from the fucking heart. And with ‘Boneshaker’, the quartet have finally made an album that sounds exactly like the music in their heads. Dave Cobb wanted to title the end result ‘This Is A Real Fucking Rock‘n’Roll Record’, but he’ll have to settle for that being the sticker…

One thing is certain: ‘Boneshaker’ is the sound of a mission accomplished for both band and producer.

“We’re not in the music business, we’re in the Airbourne business,” says Joel with a laugh. “As kids, Ryan and I had one dream – to be the best rock‘n’roll band in the world, and to travel around the globe proving that night after night after night. There was never a Plan B. And now we’re doing it, and we’re fucking loving it. The last song on the album says it all. Rock‘n’Roll For Life. For us, there is no other life.”