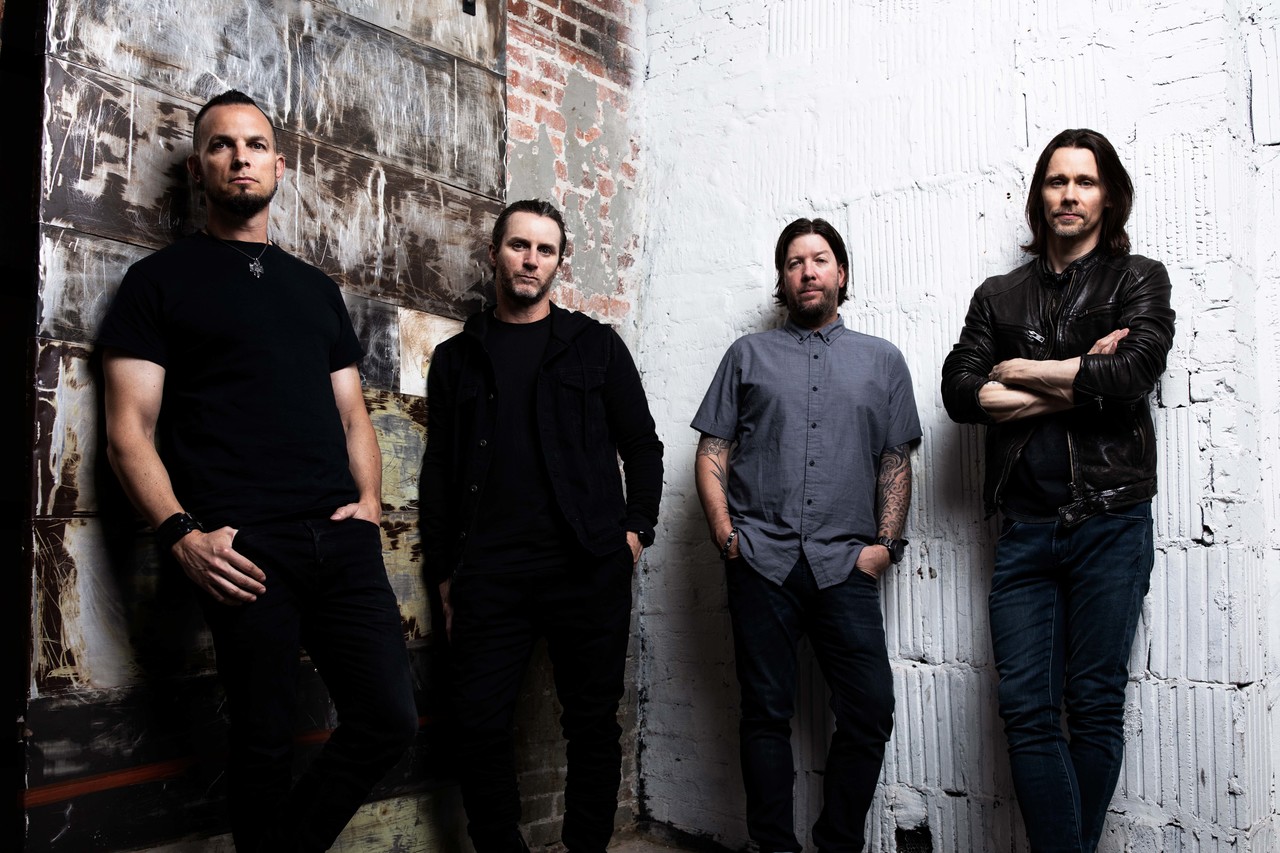 The parity of timeless songcraft, skyscraping vocals, masterful technicality, and sheer determination quietly established Alter Bridge as a universal force in hard rock around the world.

Since emerging in 2004, the Florida quartet—Myles Kennedy [vocals, guitar], Mark Tremonti [guitar, vocals], Brian Marshall [bass], and Scott Phillips [drums]—vaulted from the gold-certified Top 5 debut, One Day Remains, to critical and fan adoration highlighted by countless sold out shows, over 1.5 million albums sold, and in excess of 100 million streams to date. Within its title track, 2007’s Blackbird housed what Guitarist Magazine voted “Greatest Guitar Solo of All Time.” Three years later, the band achieved its first #1 on “Isolation” from AB III. 2013 saw Fortress attract unparalleled acclaim with perfect scores from Total Guitar and KERRANG! and raves courtesy of Billboard, The Guardian, Loudwire, and Ultimate Guitar. The musicians also covered Classic Rock Magazine who exalted Fortress as “The best thing they’ve ever done.” Tastemaker Eddie Trunk also boldly proclaimed it, “A top 10 album of the last 10 years.”

In 2016, The Last Hero bowed at #8 on the Billboard Top 200 as the band went on to sell out a pair of 2017 shows at London’s Royal Albert Hall accompanied by the 52-piece Parallax Orchestra—as captured on the 2CD and DVD set, Live at the Royal Albert Hall. Not to mention, they filled the O2 Arena and set stages ablaze everywhere from Download to Red Rocks Amphitheatre. Plus, they made appearances on VH1, The Tonight Show, and Jimmy Kimmel LIVE! as their catalog resounded on WWE, Major League Baseball, and NASCAR.

However, the quartet perfect a sense of creative balance on their sixth full-length, Walk The Sky [Napalm Records], an album that brought the band their first career #1 on the Top Current Albums Chart as well as over a dozen charts around the globe.

“Those three words Walk The Sky evoke an image,” explains Mark. “Think of a person walking on a tightrope. This individual is on the edge of life and death, yet still moving forward. In many ways, this chapter deals with enlightenment in the sense of Zen meditation. To Walk The Sky, you untether from rules and break out of your body.”

“It feels like an uplifting record to me, especially from a lyrical standpoint,” Myles elaborates. “Musically, the songs are shorter with crystallized arrangements instead of the epic journeys we’ve embarked on in the past. Not that there is anything wrong with epics, but it was time to mix things up. In many ways, Walk The Sky is essentially the spiritual follow-up to AB III. That record was very dark with echoes of spiritual disillusionment throughout. That time in my life was an important part of my journey—a journey that has continued for decades and ultimately brought me to where I am now. The new music is a sonic manifestation of someone who has a better understanding of where he fits in the universe and how to interact with it.”

Adding another dimension to the creation, Mark and Myles tackled the writing process separately. For the first time, they respectively contributed fully fleshed out ideas for consideration before entering a room together. The decision allowed their individual creativity to flourish and solidified a structure. As Myles toured with Slash and Mark fronted Tremonti, they shared demos in Dropbox. By the time everyone regrouped in early 2019, themes, concepts, and songs took shape.

“Myles and I wrote songs mostly on our own, which is different from all of the other albums,” says Mark. “Usually, we meet up, sit in a room, and create. Half of this initially came from Myles; the other half came from me. We came to the studio more organized and got to choose the best of the best material. Everything was already massaged into place and polished before we got in with the band. We were able to take an extra step to polish it further.”

Reteaming with longtime producer Michael “Elvis” Baskette [Slash, Sevendust], they spent two weeks jamming on the songs as a unit and “making them better” prior to even pushing “record.” After five weeks of recording, Walk The Sky came to life centered around a renewed spirit.

“With every album, we try to make it a different animal,” adds Mark. “We want each one to have its own personality. It’s got a lot of energy. Rather than space and atmosphere, it gets straight to the point. A lot of it rocks, but it never gets melancholy. There are dynamics, energy, and a positive vibe to it.”

Following the ethereal intro of “One Life,” the record kicks into high gear on the powerful, yet pensive. “Wouldn’t You Rather.” Propelled by a high-energy groove, punchy riffing snaps into a seismic refrain as Myles soulfully asks, “Wouldn’t you rather, live from the heart?”

“It can be traced back to a famous phrase by the late Joseph Campbell, ‘Follow your bliss’,” Myles continues. “It’s my personal mantra, and it still resonates with me as much as it did when I first heard him say it in an interview thirty years ago. To me, it’s also a reminder to follow your internal passion and not be swayed by what can be an empty pursuit of material gains that ultimately won’t bring you long-term happiness.”

Thick guitars coil around a thunderous beat as a hummable lead cuts through “Native Son” before a confessional chorus, “I’m just living in a world I can’t understand.” Under the influence of timeless John Carpenter scores, Alter Bridge incorporate moody synths into psychedelic rock kaleidoscope of “Pay No Mind” and gorgeous elegy “Godspeed.” The latter serves as a dedication to the memory of Mark’s lifelong friend Seth, offering a tender send-off on the wings of another sweeping refrain, “Farewell, Godspeed, goodbye, you have lived, and you have changed all our lives.”

“Seth was a very dear friend of mine who passed away recently,” sighs Mark. “He was such a big fan and a brother to me. I always played demos for him. The lyrics reference wishing someone luck on their journey.”

“Take The Crown” slips from nimble clean guitar and a whispered promise from Myles—“So sorry, so sorry, but you’re going down”—into a trudging groove and what Mark describes as his “favorite guitar part on the album.”Everything crescendos towards “Dying Light.” A patchwork of orchestral swells, tense harmonics, and lyrical guitar leads, it offers a fitting conclusion to the trip.

“It sort of wrote itself in a lot of ways,” Myles goes on. “It was like stepping up to the canvas and painting with no clear idea of where I was going. After completing the lyrical ‘abstract painting’, I stepped back to gain perspective and realized it could be interpreted in a few different ways. With that said, there’s a key line in the chorus that tied it together for me, ‘In the Dying Light, we learn to live, when we give in, to the silent waves that crash inside.’ To me, that represents the idea of letting the ego die, detaching from the noise in your head and surrendering to the moment.”

On Walk The Sky, Alter Bridge will encourage audiences to do the same, ultimately.

“Hopefully, the music might move or inspire listeners the same way we’ve been inspired by countless albums over the years,” the frontman leaves off. “Even though this has a very specific meaning to me, I hope the listener is able to extract his or her own meaning and perhaps the songs will give them new insight into their own journey. That would be beautiful.”

“I’m just very proud of Alter Bridge,” concludes Mark. “We started out as a little band facing a very uphill battle. We struggled and struggled. To get to the level we’re at now is unbelievable. It shows me all of the work we put in wasn’t in vain and we’ve got many more battles to fight.”— Rick Florino, June 2019