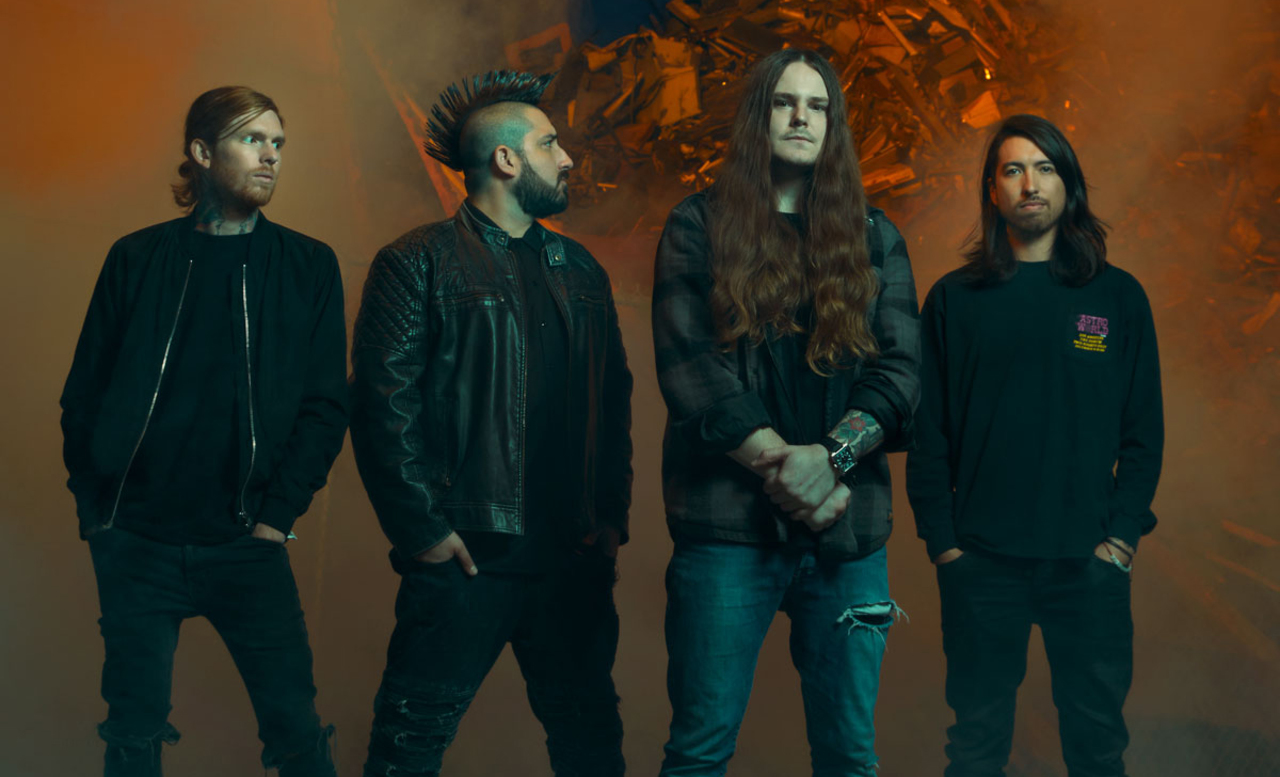 Changes don’t have to actually change anything.

No matter what changed around them, the Southern California quartet—Aaron Pauley [vocals, bass], Valentino “Tino” Arteaga [drums], Phil Manansala [lead guitar], and Alan Ashby [rhythm guitar]—clung to their identity while making the aptly titled Defy [Rise Records]. In fact, the group’s fifth full-length album not only reasserts that identity, but also cements it stronger than ever before.

“Making this record was so much more about figuring out who we are and developing that, rather than trying to reinvent ourselves and come out with something new,” affirms Aaron. “We live in a culture where everything is digested seconds at a time. Instead of 15 minutes of fame, it’s 15 seconds of fame. Even though it’s become a one-serving singles and streaming industry, we make records that you’re meant to digest over a long period. For the past five years that this lineup has been together, people have expected us to fail. We took that and let it be a motivating fire for the overall vision. Change won’t define us. We’re going to define ourselves. We didn’t want to become a new band; we just wanted to be Of Mice & Men.”

Since 2010’s self-titled debut, Of Mice & Men have confidently charged forward fueled by metallic energy, seismic melodies, head-busting grooves, and sweeping, stadium-size hooks. Following the breakout success of 2011’s The Flood, the band reached household name status on Restoring Force in 2014. The record triumphantly bowed at #4 on the Billboard Top 200 and spawned signature hits, including “Would You Still Be There,” “Feels Like Forever,” and “Bones Exposed,” totaling over 100 million cumulative streams to date. Along the way, the boys would grace the covers of Metal Hammer, Alternative Press, Kerrang!, Revolver, and more in addition to earning acclaim from Rolling Stone and Billboard, among others. An unforgettable live presence, they’ve ignited stages alongside titans such as Ozzy Osbourne, Aerosmith, Five Finger Death Punch, Rammstein, Linkin Park, and Slipknot, to name a few. 2016’s Cold World arrived in the Top 20 of the Top 200.

With Defy, Of Mice & Men toured in tandem with the creative process, making much of the music for the album on the road. Between show-stopping sets at U.S. festivals including Rock on the Range, they unleashed a pair of punchy and powerful singles—“Unbreakable” and “Back To Me”—which notched 7 million-plus Spotify streams and 5 million-plus YouTube/VEVO views in six months’ time. After a string of successful European fests highlighted by a return to Graspop Metal Meeting and Hellfest as well as their Download Festival debut, they returned to the West Coast in order to finish recording Defy with the help of GRAMMY® Award-nominated producer Howard Benson [My Chemical Romance, Three Days Grace, Skillet, The All-American Rejects].

“We had just been in front of tens of thousands playing our music night after night,” says Tino. “That inspired us to write more with a live sound that could move the audience.”

“We made the last few records after months of not being on the road,” Aaron elaborates. “It becomes really easy to look at the process in a myopic scope. You end up forgetting the people who consume the music. Going into the studio immediately after we got off the road, the crowd was in our mind since day one. We had discerned the elements that ignited them.”

A thrashed-up gallop of muscular riffs powers the single “Warzone.” Guttural growls suddenly slip into the mosh pit-ready chant, “THIS IS A WARZONE!”

“We were thinking of circle pits and crowd surfers,” Tino explains. “We’ve always been a live-oriented band. This taps back into a place where some fans may feel like we left. It’s a very dark track. Lyrically, it’s about the phases of a panic attack.”

A marriage of crushing polyrhythms and melodically-charged crooning, “Forever YDG’N” brings things full circle as it completes a trilogy started by “YDG” and continued with “Still YDG’N.” Appropriately, its lyrics nod to “Those in Glass Houses” from Of Mice & Men, “When You Can’t Sleep At Night” from The Flood, “You Make Me Sick” from Restoring Force, and “Away” from Cold World.

“‘YDG’ has been in our ethos since Day One,” continues Tino. "It’s short for ‘Ya Dig,’ which asks the question, 'Are you with it, or are you not?' You have to be the proponent of positivity in your life. ‘YDG’ means to believe in yourself. It was important for us to include ‘Forever YDG’N in this album."

In addition to a surprising and soaring cover of Pink Floyd’s “Money,” the group pull back into raw vulnerability on the heartbreaking acoustic closer “If We Were Ghosts.”

“That’s probably the most meaningful song on the record,” sighs Aaron. “We were all together when we got the news that Chester Bennington had taken his life. We toured with Linkin Park, and his music affected my life. He was somebody I would text at one in the morning when I saw something funny or ask for advice about my voice or what to do when touring gets hard. We all broke down crying. It details missing somebody. If we were both ghosts, we could do so much together, but I have to wait until I get to the other side. I never did get to say goodbye.”

In the end, Defy is Of Mice & Men at their purest.

“Life is never going to stay consistent,” Aaron leaves off. “No matter what, you can express who you are through all that though. Change doesn’t have to define you. We didn’t let it.”

“You can hear the message in the music,” says Tino. “Either ya YDG, or Y'DON'T."